Water UK and Northumbrian Water discussed water’s role in the Race to Zero initiative and how the water industry is tackling process emissions at the Marrakech Partnership for Global Climate Action (MPGCA) event at COP26 on Friday 5 November.

Our chief executive officer, Christine McGourty, joined the event alongside Heidi Mottram, CEO of Northumbrian Water outlining what the UK’s water industry is doing to play its part in reducing carbon emissions and combating climate change.

Christine spoke about the Race to Zero initiative, which followed the launch of Routemap 2030 where water companies in the UK have committed to reducing their carbon emissions to net zero by 2030. The Routemap 2030 is now being used as a template for what can be done when industry works together and is galvanising global action with 26 water utilities companies covering 72 million customers involved in Race to Zero across the world. The panel was also an opportunity for Christine to discuss the challenges that are created through the processing and treatment of wastewater. Christine said: “Our simple call to action is to get governments and regulators to play their part in mobilising the private investment and policy that is needed to solve the process emissions challenge.”

Christine finished her remarks highlighting Water UK’s role in sharing knowledge and best practice across the water industry that will go a long way in delivering net zero for the sector.

Guests also heard from Heidi Mottram, chief executive officer for Northumbrian Water, which has been at the forefront of climate action. Since 2008, Northumbrian Water has reduced its carbon emissions by 82 per cent largely though Thermal Hydrolysis Advanced Anaerobic Digestion, also known as ‘Power from Poo’ and Heidi noted to the panel that the company was on track to reach net zero by 2027. 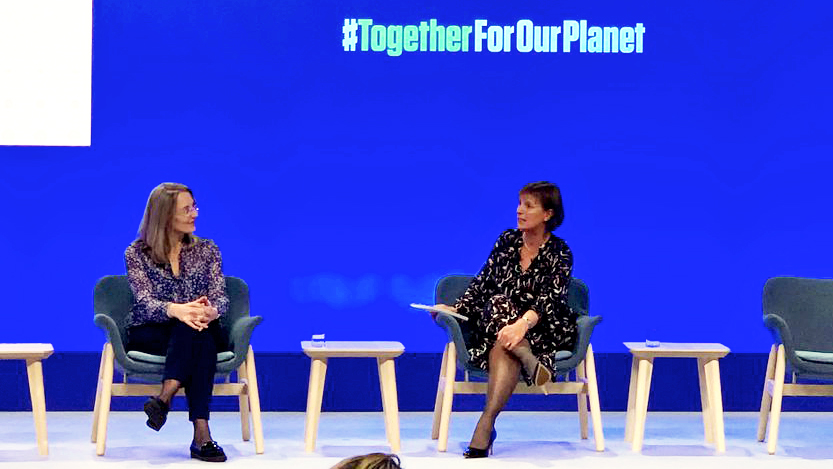 Northumbrian Water are also looking to do their part in solving the nature crisis and are working on collaborating with partners in the city regions of the North of England to ensure that nature-based solutions are part of cities’ decarbonisation and water resilience efforts. Heidi also noted the importance of radical thinking when it comes to tackling climate change and ensuring all employees are on board with the net zero and sustainability journey, saying: “In every aspect of your business, you have to challenge the thinking and embrace your people, and bring them into it.”

The session was also an opportunity to discuss the Glasgow Declaration for Fair Water Footprints, which was signed at COP26 by 28 institutions and organisations representing 180 million people. The pledge commits each member to drive fair, sustainable and resilient water use by 2030. Lord Goldsmith spoke about the recent commitment and said the pledge would ‘get the ball rolling’ on the political commitment to ending the abuse of water. He also emphasised the importance of developing the implementation of nature-based solutions and that until COP26, they had received very little attention and finance. This, he claimed, has changed since the conference.

Cate Lamb, global director of water security at CDP, also talked about focusing on cities around the world that are on the frontline of the water crisis. Cate referenced the Resilient Water Accelerator and the Africa Urban Water Resilience Initiative, which aim to deliver robust water infrastructure and support the data and expertise required to expand water security in a sustainable way.

Hasin Jahan, country director of Bangladesh at WaterAid, welcomed the Resilient Water Accelerator that will bring Government, sector experts and communities together to increase climate finance to the global south. Hasin noted that the flow of money to the global south needed to be increased to ensure there is sufficient investment in infrastructure that delivers clean and reliable water resources and services to the worlds’ poorest.

The event concluded with the speakers noting the historic nature of this COP with the first-ever Water Pavilion being a platform for companies, organisations and governments to come together to debate, discuss and share solutions in tackling the global water crisis.